journal entry, forgotten until May, 2020

A journal entry I made, dated January 10, 2020, and entirely forgotten by me until May, came as a shock as I read it, as I remembered the prophetic ‘vision’ and its dark implications for our planet and our civilization.

A meditation technique I often use is the ‘movie theatre’ technique. That’s if I don’t have too many thoughts streaming through my mind, and I can easily let go of the ones I have. And unlike being in a real movie theatre where you will miss the whole movie if you dwell on thoughts instead paying attention to what is on the screen — there won’t even be a movie to see.

The key to this technique is ‘expectation’ or ‘anticipation’. It’s like being in a real movie theatre, looking at the large dark picture screen just before the movie begins and after the lights have dimmed. Your whole focus is on the dark screen in front of you, not on any thoughts, worries, or the popcorn for that matter!

With my eyes lightly closed, and focusing on the dark ‘screen of the mind’, a rectangular movie screen, like that of a movie theatre screen, suddenly appeared. In it, a starry night sky with our planet earth in the centre. With a vantage point in deep space, the earth zoomed in and out, showing different parts of the planet each time, couldn’t remember how many times. All the while, a low, somber male voice narrated a sequence of world events happening over time. The whole ‘show’ maybe lasted about thirty seconds, don’t know for sure, not that it matters.

Below is a graphic representation of my vision. Caption reads:

“Agents of the Lord of Darkness Plan an Attack on Humanity” 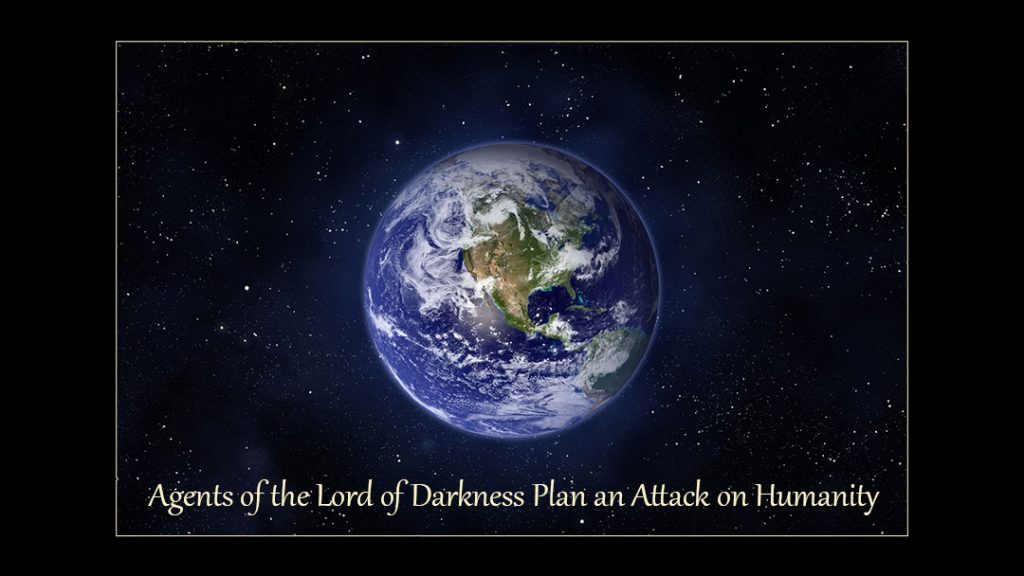 My ‘interpretation’ of the vision is shown below which is a scan of the original journal entry made on January 10, 2020. In case you can’t read my writing, and I sometimes have difficulty deciphering my own handwritten notes, it reads:

large screen
narrated by male voice
shows a historical sequence of events
(happenings, zooming in and out of map of world / whole planet from outer space) 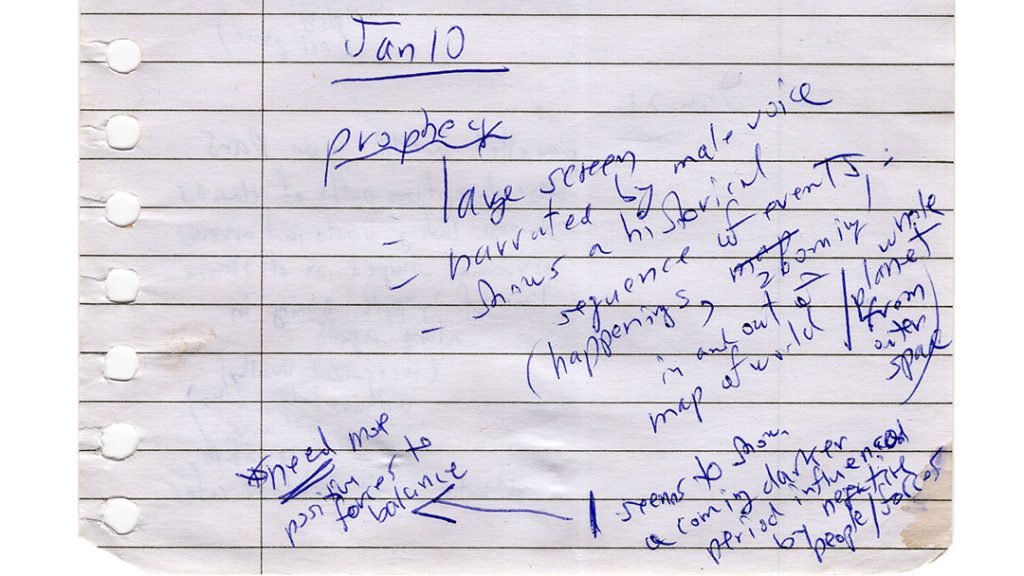 I could not remember what was being narrated. I guess my ‘mind censor’ came into play restricting what I could remember.

In light of what has happened in the world since March (2020), and is still happening as of this writing (November), there has been a sequence of events indeed! When will this ‘dark period’ and nightmare end? When more Light enters into the world to dissipate the darkness.

My next post will shed more light on these ‘events’. It is a complete transcript of a message given by Antocal Nesdi, spiritual leader from the Andes, Columbia, S. America. She calls what is happening a ‘crisis of manipulation’.

Next: A Message from Antocal Nesdi — a crisis of manipulation