this message can wait no longer!

I really thought that by now, mistakenly in retrospect, second month into the new year of 2021, that enough people would have their eyes open and realize the insanity of wearing masks, social distancing and lockdowns to prevent the spread of this fake virus which, if it were real, has a 99.97% recovery rate for most who become ‘infected’.

Boy was I wrong! In my province of Ontario, people are more scared than ever! Kudos to the news media and big pharma propaganda machine! Everywhere I see people wearing masks, inside the stores, in their cars, walking outside with nobody else around, many even believing the medical ‘experts’ that they should ‘double up’ on masks and wear two of them, one over top of the other! How about three or more? More ‘protection’ from the ‘boogeyman’ but more brain cells gone!

Is it possible, as some believe, that the world is experiencing Divine Chastisement, as possibly prophesied by Our Lady of Fatima in 1917, for turning away from God?

Or are we, as a civilization, and as many believe, living in ‘end times’ as prophesied in the Book of Revelation (New Testament), and awaiting Judgement?

“currently, the fallen angels and the angels of darkness are doing their task” *

dark forces ‘authorized’ by Divine Source to do their work

humanity: Why is this happening? Where is the help from Spirit?

sb (Supreme Being): have patience, help is on its way and those spirits of the dark side, along with their hosts, shall be swept away.

dl (Dark Lord): why help humanity? they don’t deserve it! humanity has fallen away from its spiritual origins and has embraced idolatry more than ever before, placing more and more of their trust in technology, materialism, science and governments rather than in Spirit and their Creator.

sb: That may be so, but these are My children and I will help them.

dl: Then first, let me do my job and teach them a lesson so that they may be cleansed. I will test humanity to see if they repent of their ways and are deserving of redemption.

(above dialogue dialogue between Supreme Being (sb) and the Dark Lord (dl) is based loosely on a lecture given by Rabbi Alon Anava, one of the few rabbis in Israel that warns against taking the new vaccine, and that believes the ‘pandemic’ was planned.) **

this too shall pass” (from ancient Persian poetry; ring inscription)

“after this catharsis
Life will be wonderful
For each one of us,for those who will stay in this plane
And for those who are going to the other plane”

The reason I’m including the above excerpts in this post is because they suggest (or rather prophesize) an eventual end to the current madness (‘situation’), whenever that may be, hopefully soon. And with a future we can all look forward to.

The first excerpt even prophesizes a ‘quantum jump’ in consciousness when this is all over. Something I read about elsewhere but also something I know little about at this point, with no ‘vision’ yet concerning this!

I really do not know what to make of the second excerpt!

It was in the early morning of September 8, 2020, as I was coming out of a deep sleep, and now fully awake, that I saw, on the dark screen of my mind, a large number 4 in blazing orange, like it was on fire. This ‘vision’ lasted less than a second but was very clear and distinct (see graphic representation below).

telepathic word, voice of our Creator

I knew that this vision had something to do with the current worldwide crisis as I had persistent questions on my mind as to what could be done about it. So I was not too surprised when, soon after, what seemed like ‘telepathic’ messages/words came ‘streaming’ into my mind, which I wrote down, and which formed the basis of the four new ‘commandments’. 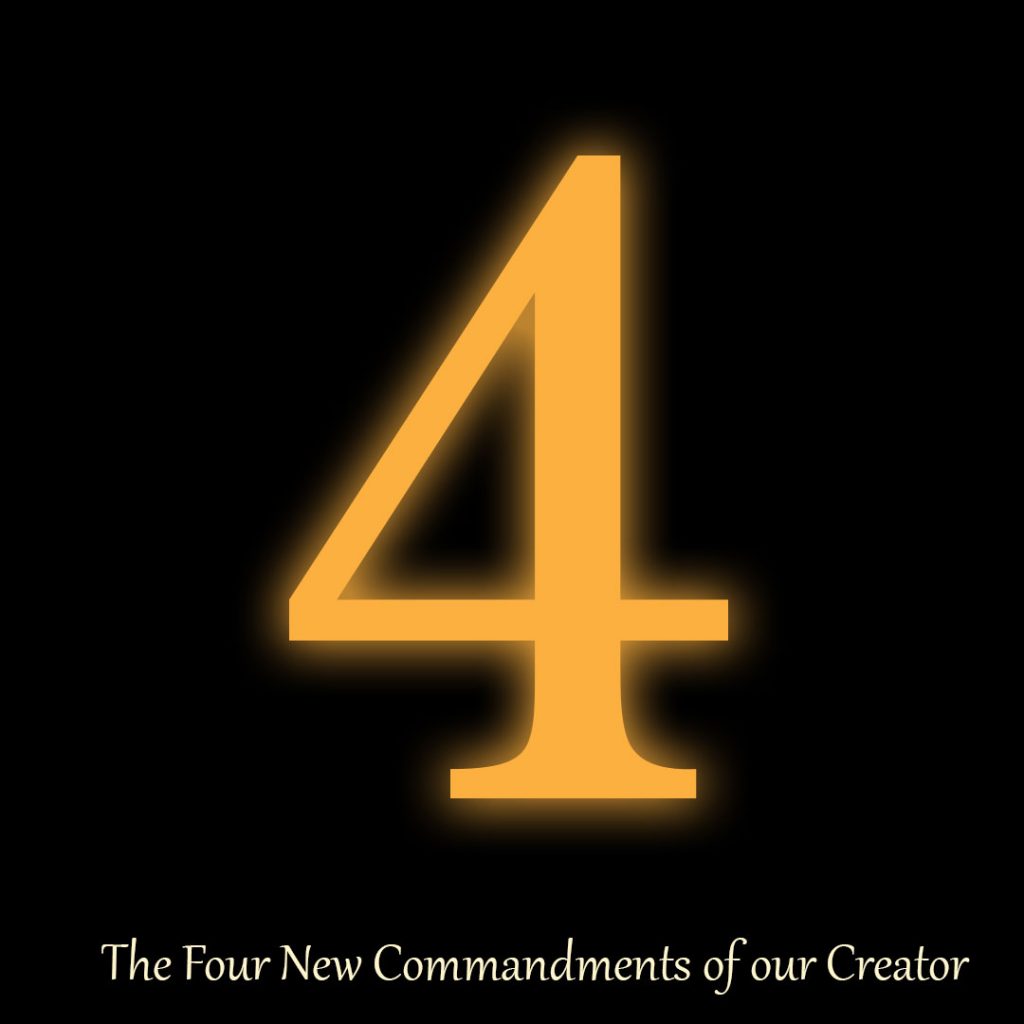 “The Four New Commandments of our Creator”

1. “Thou shalt not divide My children, one from the other”

2. “Thou shalt not take away the breath of life that I have given to each of My children”

3. “Thou shalt not spread falsehoods among My children”

4. “Thou shalt not poison the vehicle that I have provided for each of My children”

It was clear to me that Spirit was showing a way for redemption of our civilization, to avoid judgement of biblical proportions which would bring our civilization to a catastrophic end. And that way was through repentance. And that repentance must, at least in part, take a form that ‘respects’ the four new commandments.

This is my original post day (of this post to this blog), after writing for it over the previous week. I was reluctant to post these ‘commandments’, wondering if it would make any difference in combating the globalist elites agenda. But then, why would Spirit give me this vision unless It felt I (as a channel for the Divine) could make a difference by delivering Its message?

Well, during the night, and in the ‘dream state’, I was shown one of my favourite restaurants in the downtown area, presently closed except for takeout. In the dream, not only was this restaurant open, but it was filled to capacity with customers who were all having a great time. No evidence of social distancing or the wearing of masks! Wishful thinking or was I seeing into the (hopefully near) future?

After posting to this blog in the morning (before adding this section), I received confirmation that I was right on track by continuing with these blog posts.

As we were about to back out of our driveway to head for our daily coffee break (in the car because coffee shops were still takeout only), after clearing it from a major snowfall earlier in the day, on this bitterly cold but sunny day, as I looked up through the car windshield, a large bird landed on the roof of our carport. It was a red tailed hawk! After a few moments, it took flight, spreading its wings and flying over top of the roof of our house, towards the left, thereby crossing our path.

I believe it was the same hawk that crossed my path last year on April 30! ****

* see my blog post, a message from Antocal Nesdi, a crisis of manipulation

** Rabbi Alon Anava, born and raised in Israel, had a Near Death Experience (NDE) due to a sudden cardiac arrest on the morning of Passover 2001, an event that changed his life, from a person who hated religion to a passionate rabbi. Read more about him here.

This video (in the link) is quite long, long winded and repetitive, but is interesting (and I believe revealing) as he talks about Biblical prophecy of the end of days battle and the destruction of evil by God!

Should you take the vaccine? Find out here.

*** Jonathan Cahn, Messianic Christian pastor (also calls himself a rabbi) and author, knows a lot about repentance and repeatedly and strongly voices his concerns in his sermons that unless America (and the rest of the world) repents, that Judgement shall befall upon the nation. He is the author of The Paradigm, prophetic bestseller, wherein he shows a parallel between events in the past (kingdom of Israel in the 9th century BC) and the present (America in the 20th and 21st centuries).

**** see the section the hawk heralds launch of my blogs in my blog post, Bokonamirus 2020 four — April, May and June

Next: James Book of Revelation: Seven — The Watchman Blows The Shofar