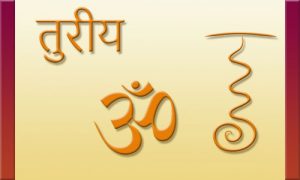 The two symbols on the top left and bottom center are actually words written in Sanskrit, one of the oldest languages in the world, its roots being in ancient India.

The word on the top left is the Sanskrit ‘turiya’, meaning ‘fourth’. It is the fourth state of consciousness as taught in Hindu philosophy, the first three states being waking, dreaming and the deep dreamless sleep. It is the symbol for ‘pure consciousness’, the fourth state.
I find that these four states are very much misunderstood, there being many ‘states’ in a continuous ‘stream’ of consciousness. Tune in to my blog and I will explain this and many more things based on my own experience.
Just to give you some idea of what is misunderstood — the third ‘dreamless’ state is only dreamless because the mind cannot accept (therefore filters out or even denies) what we experience within deeper spiritual levels which are far removed from our everyday experience in our waking state.

The ‘word’ on the bottom center is the Sanskrit ‘om’ or ‘aum’, a sacred symbol in Hinduism, written in Devanagari script.
I have never studied Sanskrit or any of the scripts used in writing the language. I include this symbol in the above image because of its importance — it represents the sound ‘aum’, chanted by many around the world as part of their meditative practice. It is considered by many to have ‘spiritual’ power.
My intention is give to this symbol a much broader meaning. As you will find out by reading my blog, ‘aum’ is one of many sounds that you can chant to ‘raise’ your vibrations and thereby connect with higher states of consciousness.

The symbol on the right is the ‘Tibetan fire serpent’. It may or may not be called Tibetan as its origin is unclear. Its origin matters not. What is important is the meaning of the symbol. The uncoiling ‘serpent’ represents the Kundalini, meaning ‘coiled one’ in Sanskrit.
The idea here is that, with meditative practice, you can ‘uncoil’ latent energy (primal energy) which at first resides at the base of the spine, then moves up through an energy channel connected with the spine (opening the various chakras along the way), finally reaching the top of the head (crown chakra).
The practice of doing this is referred to as Kundalini Yoga. Chakras are energy centers such as the heart chakra/center, there being seven major ones beginning with the base chakra (at the base of the spine) and ending with the crown chakra near the top of the head.
The word ‘fire’ is used to describe the burning heat generated that is experienced by one who practices this form of Yoga.