In a vision during contemplation in the early morning hours, the word ‘Kadesh’ appeared across the screen of my mind. Simultaneously, I heard what sounded like an ancient horn, playing two notes, the first one short, the next, a perfect fifth higher, and much longer.

After doing some online research, and with help from a friend, I realized that what I heard was the ram’s horn, an ancient instrument, blown as a trumpet and called the ‘shofar’ by the ancient Hebrews.

The watchman stood on guard on the walls of ancient cities and blew the horn to warn the people of an approaching enemy, sounding the alarm, to ‘wake’ them up and have them prepare to defend the city, prepare for battle.

Although ‘Kadesh’ appears several times in the Bible, for example, in reference to the years of wandering in the desert by the Israelites, Kadesh was also a place where occurred a famous historical battle between the Egyptians and the Hittites (1274 BC according to historians). 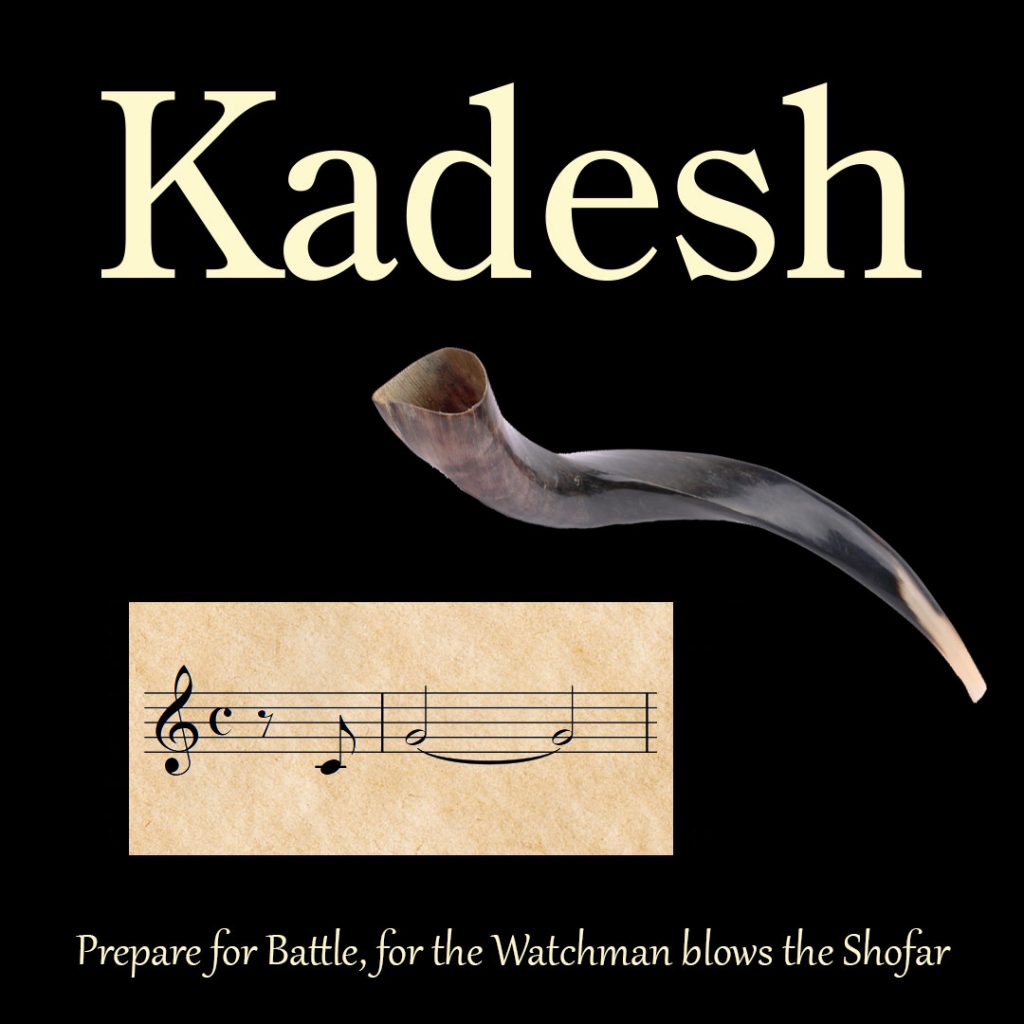 “Prepare for Battle, for the Watchman blows the Shofar”

ezekiel 33 (from the Bible, excerpts)

“Son of man, I have made you a watchman for the people of Israel; so hear the word I speak and give them warning from me.”

In 721 BC the kingdom of Israel was invaded by the armies of the Assyrians, and destroyed. The people of Israel did not heed the warning.

Was the warning really about an approaching army?

Ezekiel 33 (excerpt): “As surely as I live, declares the Sovereign Lord, I take no pleasure in the death of the wicked, but rather that they turn from their ways and live. Turn! Turn from your evil ways! Why will you die, people of Israel?”

who watches over our planet and the civilization of humankind?

A watchman was assigned to warn the people of Israel; a specific and concerned aspect of The Angelic Host watches over our planet and civilization.

why is the Angelic Host sounding the alarm?

Humanity is in danger of being defeated and enslaved by the forces of Darkness. The Lord of Darkness is being allowed to wreak havoc and destruction on humanity in an attempt to awaken people to their true natures as spiritual beings. For too long now, more and more people of our world have turned to idolatry, the worship of material wealth, power and fame. They place their trust in the agents of Darkness rather than in Spirit.

The attack on humanity is reaching a critical stage with the worldwide ‘immunization’ program, using vaccines and radiation as bioweapons.*

The people of our world must heed the warning of the watchman or be destroyed.

And unlike conventional battles, with swords and spears of ancient times, or with guns and bombs of current times, the current ‘battle’ is anything but conventional. And as of this writing, most people are not even aware that there is even a battle raging! Or that, if more people do not wake up, and soon, the battle will be lost!

who is the enemy?

The first step in defeating the forces of Darkness is to identify and expose the enemy, their lies, propaganda, fearmongering, deceit and sinister plans — and reveal the truth.

if the battle is lost

The battle must not be lost, for if it is, and humanity is enslaved by the forces of Darkness using the globalists (with their ‘great reset’) as hosts, then shall come The Great Spiritual Reset, for our Creator will not tolerate world tyranny.

What is The Great Spiritual Reset? It has happened at least once before — the last time with the Great Flood that encompassed much of our planet, destroying the great civilization of Atlantis, barely leaving a trace that it ever existed! That battle was lost when the priesthood of the black magical arts were allowed by the people to take over their lives and rule over their civilization in tyranny.

In the evening of the same day of my vision (it was already dark out, being about 7:30 pm), my wife and I both witnessed, as I was driving our car, a falling star! A first for both of us. It was very bright in the eastern sky (driving eastbound) as it burned up in the atmosphere over the city (Toronto, Canada).**

What is the significance of this ‘event’, given that my vision (Kadesh and sound of ancient horn) happened only hours earlier? Could it be that our civilization is falling?

return of the king

This is the title of the third part of the movie series The Lord of the Rings (based on the book by J.R.R. Tolkien)

As I finish writing this blog post during the weekend of May 8-9, 2021, I am also watching the last of the DVDs in the series (not at the same time of course!), wherein occurs the great battle of the pelennor fields, between the army of Gondor (forces of Light) and the army of Sauron (forces of Darkness).

During the battle, the ancient horn is sounded, at least twice, with the same two notes I heard in my vision. A coincidence?

** see an actual recorded video of this sighting here.

Next: James Book of Revelation: Eight — The Sword of Aaron