a created scene not of this world

In an especially lucid ‘dream’, I was taken to witness an apocalyptic ‘event’. Where was this taking place? In a staged setting created out of the void or nothingness. Who created/manifested this? Apparently the work of the Lord of Darkness! And who was present, besides the ‘speaker’? A large audience consisting of world leaders from every corner of our world (in spirit form, of course!). And all standing, rigid like mannequins, and dressed in dark suits as far as I could tell! And, needless to say, because of their ‘mind censor’, none of them would remember this brainwashing session.

How did they get there? Brainwashed by propaganda, I imagine they that were open and susceptible to be lured by promises of a ‘solution’ to the worldwide ‘pandemic’. For the most part, their state of consciousness, now programmed by misinformation and brainwashing, did not permit them to seriously consider other choices.

I didn’t actually go into the auditorium since I was not an invited ‘guest’, only allowed to observe from the entrance way. So I was not able (or not allowed?) to see who the ‘speaker’ (puppet master? king pin of the cabal? the antichrist?) was, only that he was talking about a plan for ‘immunization’ on a world scale; rather making an argument for it; that is, brainwashing the audience to accept such a plan!

Not everyone there was convinced since I saw a few (very few) raising their hands, questioning, or rather attempting to question the ‘plan’. I only remember one, from Uganda, who seemed to be in serious doubt about what was being planned for the human race. That is before I was whisked away and ‘woke up’ from the experience.

Below is a (very loose) graphic representation of this ‘event’. Caption reads:

What can I say? As of this writing (December, 2020) the propaganda and advertising machine for the covid vaccine rollout is in full swing in many countries.

But then, why would it be necessary to implement ‘immunization’ ie. via vaccines for a ‘virus’ that does not exist? Since this Sars-cov2 (that’s what they are calling it) either was never isolated in any lab in the world (and I have seen evidence of this leaked despite censorship by main stream media)! Or, at the very least, it is not any more dangerous than the seasonal flu. (read about viruses as ‘cleaning agents’ here: https://www.jamesdavidovich.com/blog/james-book-of-revelation-four/

immunization not about protection from viruses

Rudolf Steiner, renowned anthrophosist, when asked about the millions of victims of the Spanish flu in 1918, replied:

“Viruses have nothing to do with it. Viruses are reactions of the poisoned cell that, in defence against the poison itself, secretes the viruses to allow the cell to survive. Viruses are therefore waste products of the human cells and therefore do nothing themselves.”

Then what caused so many people to perish during the ‘Spanish Flu’ pandemic? Steiner believes it was the worldwide introduction of radio waves, which may have compromised the immune system causing many to become ill. There is evidence that most died not of any virus, but from bacterial pneumonia. Perhaps from wearing masks (which further compromise the immune system from reduced oxygen intake)? There is even evidence that many died from experimental vaccines that were being introduced and used on returning WW1 soldiers as guinea pigs!

immunization all about destroying our inclination towards spirituality

“I have told you that the spirits of darkness (emphasis mine — I call them ‘agents of Darkness’) are going to inspire their human hosts, in whom they will be dwelling, to find a vaccine that will drive all inclination towards spirituality out of people’s souls when they are still very young (emphasis mine), and this will happen in a roundabout way through the living body. Today, bodies are vaccinated against one thing and another, in future, children will be vaccinated with a substance which it will certainly be possible to produce, and this will make them immune, so that they do not develop foolish inclinations connected with spiritual life — ‘foolish’ here, of course, in the eyes of materialists.”

“The whole trend goes in a direction where a way will finally be found to vaccinate bodies so that these bodies will not allow the inclination towards spiritual ideas to develop and all their lives people will believe only in the physical world they perceive with the senses (emphasis mine). Out of impulses which the medical profession gained from presumption — oh, I beg your pardon, from the consumption they themselves suffered — people are now vaccinated against consumption, and in the same way they will be vaccinated against any inclination towards spirituality.”

Below is a scan of the original journal entry made on June 25, 2020. In case you can’t read my writing, and I sometimes have difficulty deciphering my own handwritten notes, it reads:

June 25, 3:00 am
– auditorium
– hundred of gov. leaders
in suits, standing
– speaker talking (trying to convince)
about a plan
for ‘immunization’
on a world scale
– some (very few)
question it
(eg. Uganda: 0 deaths) 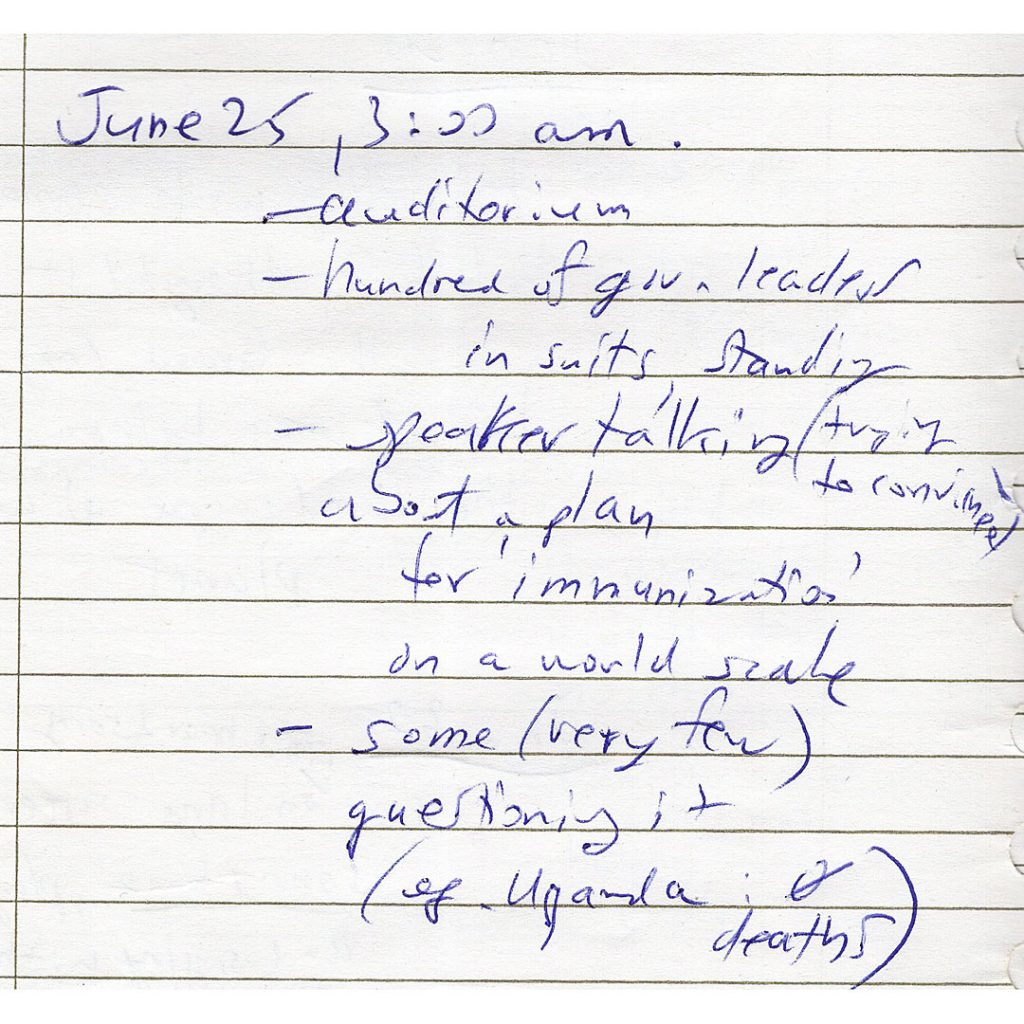 To summarize, vaccines not only weaken our natural God given immune system, making us more susceptible to illnesses of various sorts, but they also weaken our connection to our true spiritual nature, moving us further away from spirituality and, as a result, consuming us in materiality. In addition, the new RNA vaccines alter our DNA, destroying what makes us human!

Next: Bokonamirus 2020 five — the long hot summer — and masks