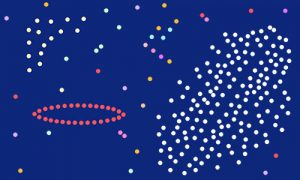 Star beings roam freely throughout our universe, exploring and visiting planets within star systems, including our own planet.

lights in the sky

Star beings enjoy forming and moving in groups through the skies. They generally cannot be seen with our human eyes although sometimes they choose to manifest themselves as groups of lights. The red group in the image above that looks like a necklace, if manifested here in our skies, is typically identified as a UFO, an alien spacecraft, flying saucer and so forth.

The group at top center is yet a different formation. The different colors represent their varied unique attributes. The cream colored group in the top left corner looks like a bird wing and would be mistaken for a different shaped flying object (if it became visible to human eyes).

The large formation on the right side of the above image represents two large groups, maybe having some sort of stellar or galactic meeting.

some prefer to travel alone

Other areas of the image represent individuals travelling, going ‘solo’ and also some that choose to travel in pairs. Individual star beings are sometimes seen on our planet closer to the surface, sometimes described as ‘orbs’.