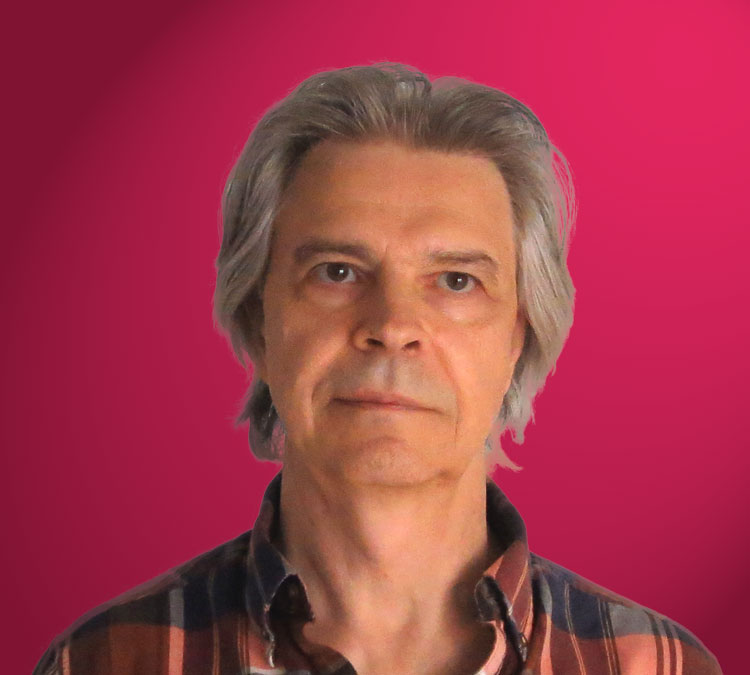 Creator of the Active Healing method of self healing and author of Active Healing and Body Restoration — successfully healed myself of many painful and serious conditions such as fibromyalgia, TMJ, skeletomuscular problems and poor eyesight using energy healing methods, all explained in my book. For details, check out my story.

As a sidenote: besides the obvious benefits of self healing to reduce and/or eliminate painful conditions, I also found over the span of many years that it is important to have a pain-free, healthy body if you are interested in meditation and wish to pursue the path of the mystic and spiritual traveler.

I call myself a mystic for want of a better term for — an observer or active participant, using my 'spirit body', of the goings-on within the dimensions commonly referred to as being on the 'other side', retaining, in whole or in part, a memory of such experiences.

There are countless numbers of mystics and 'gurus' in our world. However, a true mystic is akin to a Satguru, meaning 'true guru' in Sanskrit. Rather than a belief in the 'afterlife', heavenly planes and other dimensions, a true mystic has direct experience and awareness of these things, of the greater reality which is within each of us. All have the potential but it lies dormant until the 'inner eye' is opened and the connection to the higher or true Self is awakened.

My journey as a mystic began abruptly at age 20, when, while dozing off from reading some university course material on my bed one evening, I had my first spontaneous 'obe', or 'out-of-body' experience. Not something I planned for or even knew anything about!

Over the years, after much trial and error and experimentation I became more adept at moving into altered states of consciousness, traveling to other dimensions and parallel worlds, often ending up in strange places, experiencing a whole range of 'adventures', although not always retaining a full memory of such — thus becoming a spiritual traveler.

I find that these four states are very much misunderstood, there being many 'states' in a continuous 'stream' of consciousness. Check out my blogs and I will explain this and many more things based on my own experience.

Just to give you some idea of what is misunderstood — the third 'dreamless' state is only dreamless because the mind cannot accept (therefore filters out or even denies) what we experience within deeper spiritual levels which are far removed from our everyday experience in our waking state.

Sanskrit 'om' or 'aum', a sacred symbol in Hinduism, written in Devanagari script.

I have never studied Sanskrit or any of the scripts used in writing the language. I include this symbol in the above image because of its importance — it represents the sound 'aum', chanted by many around the world as part of their meditative practice. It is considered by many to have 'spiritual' power.

My intention is give to this symbol a much broader meaning. As you will find out by reading my blogs, 'aum' is one of many sounds that you can chant to 'raise' your vibrations and thereby connect with higher states of consciousness.

'Tibetan fire serpent' — It may or may not be called Tibetan as its origin is unclear. Its origin matters not. What is important is the meaning of the symbol. The uncoiling 'serpent' represents the Kundalini, meaning 'coiled one' in Sanskrit.

The idea here is that, with meditative practice, you can 'uncoil' latent energy (primal energy) which at first resides at the base of the spine, then moves up through an energy channel connected with the spine (opening the various chakras along the way), finally reaching the top of the head (crown chakra).

The practice of doing this is referred to as Kundalini Yoga. Chakras are energy centers such as the heart chakra/center, there being seven major ones beginning with the base chakra (at the base of the spine) and ending with the crown chakra near the top of the head.

The word 'fire' is used to describe the burning heat generated that is experienced by one who practices this form of Yoga.

the eagle and the rose

I first saw this symbol while in the 'dreamstate' — I could call it 'lucid dreaming'. It wasn't in color though, that was my doing (see 'the colors' below). Rather it was engraved in stone in what looked like an ancient stone wall, part of some larger structure. Thus, what follows is my own impression of the significance of this symbol.

The eagle is known for its ability to soar to great heights — they can reach altitudes of over 10,000 feet! — and its ability to see over great distances in an almost 360 degree field of vision — actually, it is an amazing 340 degrees!

The opening rose in this symbol is the unfolding spirit/soul. As Soul unfolds, it soars to higher and higher states of consciousness, expanding in Its vision to encompass the Greater Reality — becoming an 'Eagle-Eyed Adept'.

Active Healing exploring the path to an ageless body

My focus here is on alternate healing methods, and what I have learned from my own experience with many of these methods while, at the same time, developing my own techniques.

My main blog, exploring, unraveling, and shedding light on, the great mysteries of our world, of our universe, and of what lies beyond.

Journeys to the planets and other star systems

Welcome to my space blog! A virtual journey to the stars! I say 'virtual' because it is not using conventional means such a starship or shuttle craft like you see on Star Trek.

Many physicists theorize the existence of multiple dimensions or universes. So this is not a new idea. However, as yet, and according to these 'theorists', there is ...